J. Ricardo Guzman: A Legacy of Health Equity in Detroit

J. Ricardo Guzman, MSW, MPH, a native Detroiter who now lives in Mount Clemens, recently retired from a 45-year career with the Community Health and Social Services (CHASS) Center, one of the founding organizations of the Detroit Urban Research Center (Detroit URC). Mr. Guzman—who served as CHASS’ Chief Executive Officer since 1982—received a Master of Social Work from Wayne State University in 1977 and a Master of Public Health from the University of Michigan in 1997. Mr. Guzman is widely recognized as a national leader in community health, and he played a key role in helping to establish CHASS in 1970 to fill a void of medical care for the people of Detroit, with a focus on underserved populations. This question-and-answer interview shines a light on Guzman’s career, his community work in Detroit, and his hopes for the future.

What inspired you to study public health?

My mom died at 49 of multiple diseases. She had heart problems, diabetes, and Lupus that were only controlled when she could afford to go to the doctor, or afford to fill the medications. I wanted to figure out why all insurances were based on employment. My mom was sickly, so she didn’t have a job. It didn’t seem fair.

Can you tell me about your history with CHASS?

I was part of the community that raised issues related to healthcare in the city, and, in particular, in Southwest Detroit. There was no CHASS at that point in time. During the unpleasantries of the late 60s in Detroit with the riots, a lot of white folks moved out of the city. These people included the professionals, including physicians, serving the community. So, as they started to leave, all the community clinics they had worked out of, and the area hospitals, also started folding up. In a period of less than four years, four community hospitals in Southwest Detroit closed. So you had this lack of care because no doctors were here. For people who needed care, their only options were to go to the suburbs whenever they needed to see a doctor or to the emergency room. A group of us came together and said: ‘Why is this happening, and what should we do? How can we impact this?’

That’s when we started to envision CHASS, which was established in 1970. I joined the board in 1971.The initial dollars for CHASS came from Bill Milliken, then Governor of the State of Michigan, who was a Republican. He was probably left of anybody in Congress right now. We went to Bill and said look at what we want to do, and he initially gave us $150K out of his discretionary dollars. In the process we were able to bring other good people in from the health department and from state and local agencies. We were able to work out an agreement to provide community health services as a kind of ‘one-stop shop.’ That’s what CHASS was all about and that’s still what it’s all about.

What were those early days like, when CHASS was first being established?

Folks were just incredible. It was the time when people wanted to do something for Detroit, which turned out to be fortuitous for CHASS. It was at that time that our relationship with Henry Ford Health System began. You have to understand that Henry Ford Hospital was created for Henry Ford and his workers, and that’s all it did for many, many years. After the riots, they were wondering what to focus on, and the community was saying: ‘what about us?’ That’s why, when a couple docs came by saying they wanted to volunteer for CHASS, we said sure! They had a great experience and went back and told the Ford people [Henry Ford Hospital] that there’s a great thing going on and that they should take a look at it. Ford latched onto us, we latched onto them, and we just kept moving forward.

Can you share any other positive outcomes from those times?

We, the Latino community, also created, and were part of the initial program, at Wayne State called the Chicano-Boricua Studies, or CBS. We created it through the Labor Studies program in the Monteith College at Wayne. There was a really fine group of individuals who worked at the university--professors, and folks who were active in the unions and LA SED (Latin Americans for Social and Economic Development)--that were able to create the center for Chicano and Puerto Rican studies. I was in the first class there. I think Angie Reyes [fellow founding Detroit URC Board member] came a couple classes later. That program is still functioning at Wayne State to this day. It was all about being involved on a grassroots level. 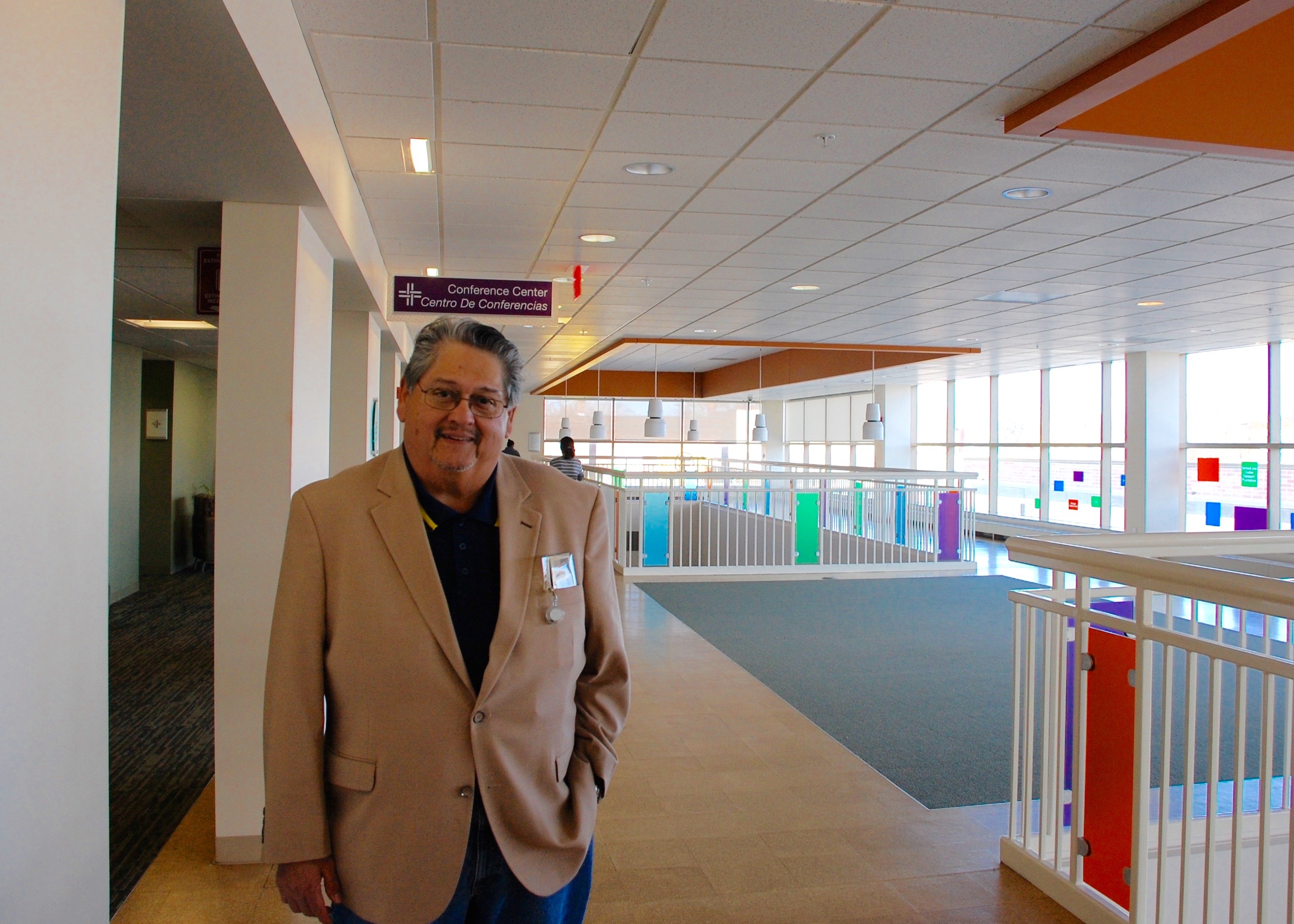 Was there a lot of collaboration across community groups at the time?

What are you most proud of with your work at CHASS all these years?

You’re sitting in it [referring to the new building that opened in 2012]: a $17 million project, and we are working to pay it off next year.

How did CHASS and the Detroit Urban Research Center come together?

Oh, that’s the story you’ve probably heard many times from Barbara [Israel]. We got a call one day from a group (from the University of Michigan) saying that they were submitting a grant application related to community-based participatory research (CBPR). I think the call was from Toby Citrin. Toby and I had worked together, as well as, Rich Lichtenstein. The grant was for CBPR, and they wanted to know if CHASS wanted to participate in it. We said ‘Yeah, sure,’ because I knew both of them.

The grant was from the Centers for Disease Control. In fact, the RFP [Request for Proposal] had come from Dr. David Satcher, who was the Director of CDC at the time. That’s when we really started exploring the best possible use of the money. That’s also when I met Barbara Israel. She was the Principal Investigator on the project, which was, essentially, to form the Detroit URC as a CBPR partnership. The grant wasn’t for much money, but it was enough to get things started.

What was the relationship between the university and Detroit like at the time?

At that point in time, the community did not have a good relationship with the University of Michigan or with researchers. My original participation in all of this, initially, was simply to make sure they [the researchers] didn’t screw it up. I was a traffic cop, making sure that the group did what they said they were going to do. That’s when Angie Reyes also got involved. She was working at Latino Family Services at the time, back before any [research] projects were happening in Southwest Detroit. Again, the project was about how to pull together and organize the Detroit URC. That was our first task. As we moved forward, we started to identify what the priorities would be. One of priorities was health and violence. We met regularly over the course of 18 months to determine what exactly we wanted to do in those priority areas and how we would to go about getting funding for programs. That was more than 20 years ago. Today both Angie, who is now the Executive Director of the Detroit Hispanic Development Corporation, and I are still involved.

How did things go working with U-M researchers?

There were a few stumbles here and there, but everything came out well. My story is always: you can do all the most wonderful planning, but the reality is, there’s nothing better than dumb luck -- and being affiliated with and/or connected with good people. Throughout my career, throughout CHASS’ world, that’s been what’s made us as good as we are. Internally, the people who work here, and externally, the people who believed in what we were doing from the get go, they’ve made all the difference.

What are you most proud of in terms of accomplishments or involvement with Detroit URC all these years?

I’m most proud of the development of URC itself. The relationships we’ve been able to build with the REACH project, as well as, our domestic violence programs that came out of URC. Those are the real big ones. I think that where the Detroit URC has moved, and has been moving further over the last five to 10 years in terms of policy, programming, and training, is great; I think that’s what is needed.
On the periphery , and I don’t want to want to downplay it, is the relationships that have been built within and between communities – meaning the African American community and the Latino community -- they really weren’t there as concretely as they are now. I’m proud of that, personally, organizationally, everything. These communities can now work collaboratively together. We have the similar problems, similar issues. While specifics may be a little different folks are still dying of diabetes. There’s still COPD. Everything that’s going on in the African American community, with the exception of infant mortality, is happening in the Latino community.

What is your vision for your alleged retirement?

[Laughs.] Right now, I really am laser focused on the national community health center movement with the National Association of Community Health Centers [Ricardo serves as Chair of the Board]. What’s going to happen as we move forward and what will happen with the Affordable Care Act.

Now, the problem is that the Obama Administration intertwined the monies from ACA for outreaching and enrollment, for capital improvement, and for expanding care, all as part of the dollars allocated to Community Health Centers. You have to explain to people in Congress that, look, if you do this, then the collateral damage up stream or downstream is going to impact community health centers. If you block grant Medicaid, then you leave those dollars to the state to decide where and how they’re to be spent. As opposed to now, at the national level, HRSA [Health Resources and Services Administration] identifies: this is what you will do, and this is who you will see. We’re required to see everybody.

This work is vital right now. In what capacity will you mostly be working?

I’ll be working as Chair of the Board of the National Association of Community Health Centers, which is made up of people from all over the country. This will be my second year. I become immediate past chair at the end of August. So somebody else will be coming up behind me. But I’ll still be working at the level that I am right now. I’ll also be serving as consultant for CHASS.

Do you think people are energized to make change today like they were in the late 1960s?

People are rallying. I think that’s what we’re seeing. Because this is crazy. People are taking it to the streets.

Anything else you’d like to say to people affiliated with the Detroit URC?

I think the only other thing I would stress is the positive relationship between the academic community and community-based organizations. Once we got past any animosity and mistrust, which we’ve been able to do with the URC, we realize that, each side, and I say that in terms of the researcher and local community, understands their role. They understand the role of different individuals and organizations that are participating. When we first started this thing, I didn’t care about researchers. I didn’t care if they got tenure. I didn’t care that they needed to publish. It wasn’t my problem. It wasn’t until we got engaged and involved—we as in CBOs, Angie, me, and everybody else—that, over time, we realized that it’s extremely important, that we’ve got friends and colleagues, we’ve got people who are interested in the same things we are who are putting their research mouth in the right place. We need to be able to support that.